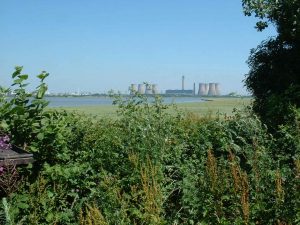 The Mersey and Irwell Navigation was a river navigation which provided a navigable route from the Mersey estuary to Salford and Manchester, by improving the course of the River Irwell and the River Mersey. Eight locks were constructed between 1724 and 1734, and the rivers were improved by the construction of new cuts several times subsequently. Use of the navigation declined from the 1870s, and it was ultimately superseded by the Manchester Ship Canal, the construction of which destroyed most of the Irwell section of the navigation and the long cut between Latchford and Runcorn.

The idea that the Rivers Mersey and Irwell should be made navigable from the Mersey Estuary in the west to Manchester in the east allowed boats “of moderate size” to make the journey from quays in Water Street, Manchester, to the Irish Sea. The navigation was suitable only for small ships, and during periods of drought, or when strong easterly winds held back the tide in the estuary, there was not always sufficient draft for a fully laden boat.

Eight weirs were constructed along the length of the route, and some short cuts were made around shallower parts of the river, with locks, to enable the passage of boats.[4] Some difficult turns along the river were also removed.

The navigation was modified and improved on a number of occasions. A canal section known as the Runcorn and Latchford Canal was added in 1804, to bypass part of the lower reaches.