Although not within in the parish of Daresbury, Norton Priory has had a significant influence upon it.  All Saints’ Church, Daresbury was founded in the 12th century as a daughter house of Norton Priory.  We know that the monks farmed the Moss and fished the River Mersey.  They used some of the tracks we use today – the farm track and footpath from Moore to Daresbury and the tracks from Daresbury, across The Firs to the flood plain in Sandymoor and from there up to Norton village.  Some of the woodland associated with the Priory still remains today and it was this that drew me to investigate the eastern part of the estate, as part of our ‘Hidden Nature’ theme.

Norton Priory was established in the 12th century and raised to abbey status in 1391.  It closed in 1536 as part of the dissolution of the monasteries.  Nine years later, the site was purchased by the Brooke family who built a Tudor style house on the site.  It incorporated part of the abbey.  This was replaced in 1750 by a Georgian House.  The family left the house in 1921, as a result of rising maintenance costs and increasing pollution from Runcorn and Widnes.  Nothing remains of the house today.  However, the remains of the abbey are a Grade 1 listed monument and the most important monastic remains in Cheshire. 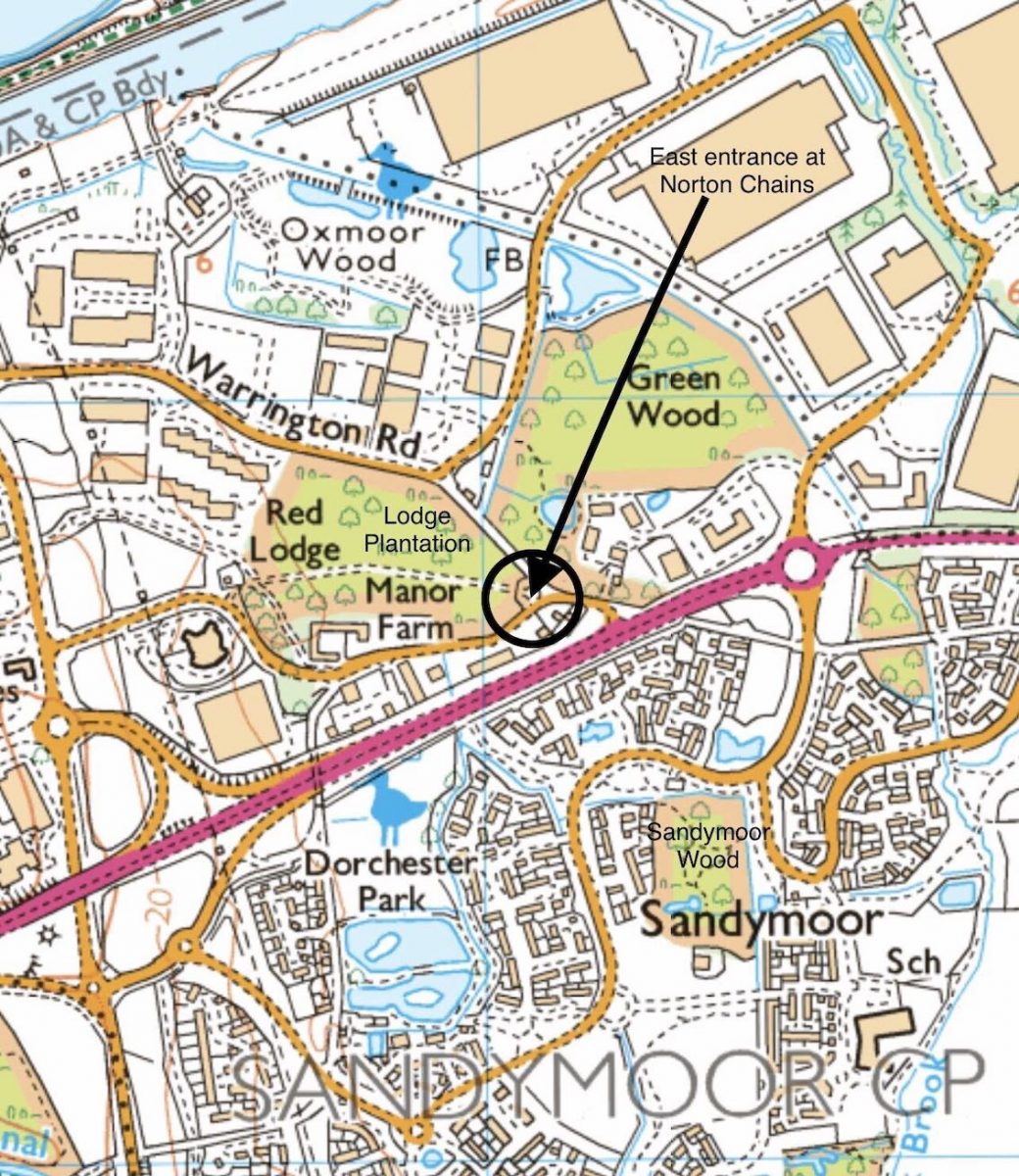 Norton Chains (read about it here) sits at the very edge of the parish and is the site of the eastern entrance to the Georgian mansion.  The tithe map of c1840, clearly shows two small buildings at the entrance to Lodge Plantation.  The tithe apportionments record that these were in fact lodges.  There is no sign of them now, nor have I seen any pictures.  However, the western entrance to the estate, in Halton village, also had a lodge and that building remains today.  I presume that the eastern lodges were built in the same style.  All these lodges were built in the early 19th century.

The old walls of the estate remain here at Norton Chains, though have largely been rebuilt.  More interestingly, are the two fine sets of gateposts – one square and the other round.  The round posts are the same as those at the west entrance in Halton village.  Three bench marks are recorded on old OS maps, but none is evident now.

There were two other entrances to the estate, but it seems that they were of less importance.  One, to the north, was sited on Warrington Road by the entrance to Haddock’s Wood playing fields today.  There is no evidence of gateposts or a lodge.  The other emerges from Big Wood onto Sandymoor Lane, by Norton Bridge.  There remain a pair of gateposts with the original fixings.  A cottage here on the outside of the estate is marked on some maps as a lodge, but I have seen no other evidence for this.

I was interested in four pieces of woodland.  Lodge Plantation leads from the east entrance up to Red Lodge and on to the mansion itself.  Red Lodge was built in 1870 as a gamekeeper’s cottage.    The path through the woodland leads directly to it.  It was planted by Sir Richard Brooke, probably in the second half of the 19th century, and is mixed broad leaved woodland with birch, oak, sycamore, yew, horse chestnut and beech.  The plantation extends to 16 acres.

Green Wood, just to the east, was again planted by Sir Richard Brooke and is of a similar age.  The woodland covers 21 acres today and is mainly birch, oak, sycamore and beech.  Some of the mature trees remain from the initial planting.  A small part is accessible from Norton Chains and has a fine show of bluebells in the spring.

To the north is Oxmoor Wood.  This now forms part of the Oxmoor Local Nature Reserve, managed by Halton Borough Council.  It is a very interesting site, renown for visiting warblers in summer and also its array of orchids.  The wood itself is classed as ‘ancient woodland’.  These are defined as woods where there has been continuous woodland cover since at least 1600.  Oxmoor Wood is only small, extending to just 3 acres and in its early days was owned and retained by the ‘Lord of the Manor’.  Oxmoor probably refers to the rich grassland nearby that would have been grazed by oxen.  Patrick Greene, in his book “Norton Priory’, makes reference to Thomas Rutter, who, in 1522, had the responsibility of supervising the oxen, cattle and horses on the marsh.

The fourth piece of woodland lies firmly in the parish and is ‘Sandymoor Wood’.  Today it extends to about 8 acres, but was more extensive in years gone by.  The tithe map records its area as being 29 acres, with another 13 acres of woodland adjoining it.  A map of the manor of Norton towards the end of the medieval period, name both Oxmoor and Sondewell Moor.  Thus Sandymoor Wood is also ancient woodland.  Today the main species are birch, sycamore and oak.  Access has been granted to the public ‘in perpetuity’.