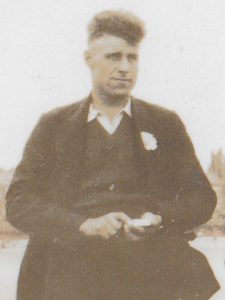 Joshua Norman Meredith was born in 1910 at Hatton, the second child of Joshua and Frances Caroline Meredith (nee Partington).  Both parents were born in Hatton.  Joshua Norman had an older sister Hilda and would have two younger siblings, Nora and Wilfred.  The father was a domestic gardener and the family lived in Factory Yard.

Sadly, Frances Caroline died in 1915, some months after Wilfred was born.

In 1921 Joshua (senior) married Elizabeth A. Parker, who was a widow with a daughter Frances who was four years younger than Joshua Norman.  The Meredith children attended Daresbury School and Joshua Norman then took on work as an estate gardener on the Walton Estate.

In the summer of 1939 Joshua Norman and his stepsister Frances were married and settled  in Hatton, next door to their parents.  His brother Wilfred, who was working as a café waiter, also lived with him.

Joshua Norman was a gunner in the Royal Artillery in WW2.  He enlisted in June 1941 and was given the service number 1826015.  He joined Unit 234 of the Light Anti-Aircraft Training Regiment.  Later he had the service number 1090500.  He fought in the jungles of South East Asia for two years with South East Asia Command and was wounded in the leg before Christmas 1944.  He was in hospital in Burma into 1945, but thankfully survived and returned home to Hatton when the war had ended.

Joshua Norman Meredith passed away in 1960 at Warrington General Hospital, at the age of 50 years.  His widow Frances lived on another 36 years, passing away in 1996.