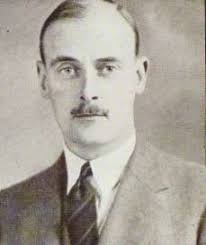 John Daubeney Whitley was born at Hatton on 23rd June 1911, the second son of John James Whitley and Dorothy Eliza Whitley (nee Daubeney).  His father was from Newton-le-Willows and his mother from Gloucestershire.  John had an older sister Elizabeth, an older half-sister Isabella Mary and an older half-brother Thomas from his father’s first marriage.  His father was the managing director of the Greenall Whitley brewing company at Wilderspool in Warrington.  The family lived at Hatton Cottage on Warrington Road in Hatton.

After he had completed his education, John D. went to work in the timber industry.  In 1933 he joined the brewery and two years later he was appointed as a director to the company board.

Sadly, John D.’s mother had died in 1931 aged 48 years.  The father and his sons continued to live at Hatton Cottage.

In 1938 he attested for the Royal Regiment of Artillery and when war broke out, he obtained an Emergency Commission and served as Second Lieutenant.  The Royal Regiment of Artillery was also known as the Royal Artillery or “The Gunners”.  His seniority was confirmed in September 1940.  He was assigned the service number 1461276.  One million men served in 960 gunner regiments during the war and they were also important in air defence.

In 1939 John D. played cricket for Cheshire in the Minor Counties Championship.  In early 1941, whilst serving in the Forces, he was elected as a member of Cheshire County Council.

Sadly, his father John James Whitley died in 1942 and John D., although absent on war service, was appointed to succeed his father as managing director of Wilderspool Brewery.  John was on the Service Register for the Electoral Roll for Hatton Cottage in May 1945, indicating that he was still away serving in the army.

On 20th May 1947 John D. was elected to succeed Lord Daresbury as chairman of Greenall Whitley and Company Limited.  The company expanded and developed under his 20- year leadership.