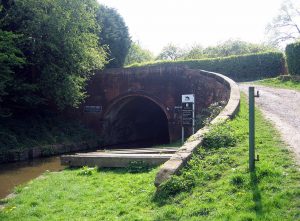 The Trent and Mersey Canal is 93.5-mile long, it is a “narrow canal” for a part of its length, but to the east of Burton upon Trent and west of Middlewich, it is a wide canal.

As its name implies, the Trent and Mersey canal was built to link the River Trent at Derwent Mouth (in Derbyshire) to the River Mersey. The second connection is made via the Bridgewater Canal, which it joins at Preston Brook in Cheshire. The plan of a canal connection from the Mersey to the Trent came from canal engineer James Brindley.

In 1761, Josiah Wedgwood showed an interest in the construction of a canal through Stoke-on-Trent, the location of his Wedgwood pottery, as his business depended on the safe and smooth transport of his pots. Pots transported by road were liable to be damaged and broken, and a canal near to his factory would provide fast and safe transport for his wares. Wedgwood’s plan was not to connect the two rivers by canal, but to connect the potteries to the River Mersey. It was authorised by an Act of Parliament in 1766 and the first sod was cut by Josiah Wedgwood in July that year at Middleport. In 1777, the canal was completed, including more than 70 locks and five tunnels, with the company headquarters in Stone.

The canal makes an end on connection with the Bridgewater Canal 11 yards inside  the northern entrance of Preston Brook tunnel which coincidentally is neither wide enough to take a Bridgewater barge nor two narrow boats side by side.