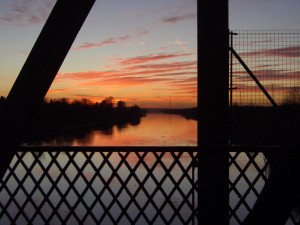 The Manchester Ship Canal is a 36-mile-long (58 km) inland waterway linking Manchester to the Irish Sea. Starting at the Mersey Estuary near Liverpool, it generally follows the original routes of the river Mersey then the river Irwell through the historic counties of Cheshire and Lancashire. Several sets of locks lift vessels up about 60 feet (18 m) to Manchester, where the canal’s terminus was built. Major landmarks along its route include the Barton Swing Aqueduct, the only swing aqueduct in the world, and Trafford Park, the world’s first planned industrial estate and still the largest in Europe.

The rivers Mersey and Irwell were first made navigable in the early 18th century. Goods were also transported on the Runcorn extension of the Bridgewater Canal (from 1776) and the Liverpool and Manchester Railway (from 1830), but by the late 19th century the Mersey and Irwell Navigation had fallen into disrepair and was often unusable. A ship canal was therefore proposed as a way of giving ocean-going vessels direct access to Manchester. The canal’s supporters were unable to gain the necessary Act of Parliament to allow the scheme to go ahead until 1885. Construction began in 1887; it took six years and cost £15 million! When the ship canal opened in January 1894 it was the largest river navigation canal in the world, and enabled the newly created Port of Manchester to become Britain’s third busiest port despite the city being about 40 miles (64 km) inland.