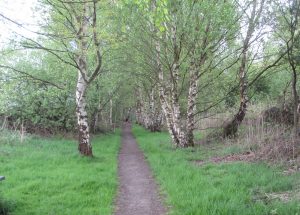 The Runcorn and Latchford Canal (also known as the Old Quay Canal or locally as “Old Quay Cut” or “Black Bear Canal”) ran from Runcorn, Cheshire to Latchford, Lancashire. It connected the Mersey and Irwell Navigation to the River Mersey at Runcorn.

The canal was built to bypass the shallow stretches of the Mersey at Fiddlers Ferry. It extended for 7 miles (11 km), ending to the east of Runcorn Gap close to the centre of Runcorn.  At Latchford, it joined the Mersey at a lock which was located above Howley Weir. At its terminus a dock was built which became part of the Port of Runcorn. The canal was built under powers embodied in the Mersey and Irwell Navigation Act (1720) which permitted new cuts to be made without the necessity of further recourse to Parliament. It opened in July 1804.

Much of the western end of the canal, including the docks at Runcorn, disappeared when the much larger ship canal was built. The eastern end fared rather better, as the section between Twenty Steps Bridge and Latchford Lock was retained. A new lock, called Twenty Steps Lock, was built where the old canal left the course of the ship canal, and it was used to supply tanneries at Howley with hides which were imported from Argentina, and this trade continued until the 1960s. This section was called the Black Bear Canal, and it ceased to be used after the tanneries closed.