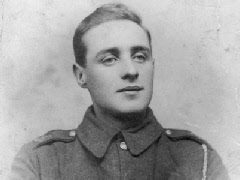 Cyril Granville was born in Newton, Daresbury on the 26th January 1894, and his parents were Joseph and Sarah Jane Furnivall (nee Lloyd). His parents had married on the 11th September 1886 in Daresbury Church. His father had been born around 1851 and was a waterman from Hatton; his mother had been born around 1861 and was from Thelwall. Sarah could not read or write and made her mark on Granville’s birth certificate.

Soon after Granville’s birth his father, Joseph, died and by 1901, to make ends meet, his mother was taking in laundry and also rented a room to a lodger, Thomas Lockett. The family were living in a cottage on Chester Road and Granville went to the school in Daresbury.

In 1903 his mother, Sarah Jane re-married to Thomas Lockett.

The 1911 Census shows that the new family were living in one of the Oaklands cottages and were all working for the Lees family at the “Big House”. Thomas was a farm bailiff, Sarah and Florence worked in the laundry. Garfield was a wine worker whilst Granville was working as a groom.

By 1914 he was employed by the soap manufacturers, J. Crosfield & Sons in Warrington. He worked in the “tablet” department, presumably making the bars of soap.

He enlisted in September 1914 and joined the 1st/4th Battalion of the South Lancashire Regiment (numbers 2535 and 200813) and he would have joined the battalion in Dunfermline to start his basic training. In October the battalion was sent to Tunbridge Wells where the training continued until the 12th February 1915. Granville and the rest of the battalion then moved to Southampton and boarded two cross-channel steamers, Queen Alexandra and Trafford Hall. The ships sailed to Le Havre and Granville landed in France on 13th February. After 48 hours in No 2 Rest Camp the battalion went by train to Bailleul on the French-Belgium border and then marched to La Clytte. There then followed alternating spells of manning the front line trenches or providing working parties for pioneer work.

On the 16th June the battalion took part in the assault of the Bellewaarde Ridge  near Ypres.

On the 23rd July the battalion was made the Pioneer Battalion for the 3rd Division and for the next few months Granville would been digging trenches and support roads, mainly at night.

In January 1916 the battalion moved to Bray in the Somme area and then on  to Beaumetz near Arras.. Work was carried out mainly on the reserve trenches and communication trenches.

On the 20th July the battalion moved to a camp south of Fricourt and every night working parties went out to the forward zones to construct communication trenches between newly captured positions back to the original lines. The troops had to work in the open and were continually swept by machine gun and shell fire.

During August the battalion was relieved and Granville was able to enjoy some leave at the seaside resort of Le Treport.

Granville was wounded on that day and died on 18th April 1917. He was buried at the Lijssenthoek Military Cemetery in Belgium. His name appears on the Joseph Crosfield & Sons Ltd war memorial in Warrington and he was posthumously awarded the 1915 Star, the Victory Medal and the British War Medal.

Granville’s sister, Florence, married Joseph Stathers in 1912.  They lived at Aston, where Joseph was a market gardener and had at least five children – Elsie, Granville, Margaret, Ruby and Horace.