In September 1916, a meeting was called of the Moore Methodist Chapel Trustees ‘in consequence of the Lighting Orders’ to consider the screening of windows in the chapel and school. It was resolved that the lamps be shaded and that a ‘Cake and Apron’ sale be organised to help meet the expense.

In 1917, the chapel paid an insurance premium of £2 2s, against damage from bombs.

In January 1918 it was decided to discontinue with this, but it must have proved disconcerting to trustees when, on the night of 12 April 1918, the German Zepplin L61 crossed the Mersey between Moore and Runcorn. It dropped its first bomb at 11.17pm on the A57 Prescot to Warrington Road, which damaged a milestone, the road surface, a water main and some property.

The second bomb was dropped at 11.20pm in a field at Abbots Hall Farm in Bold, which created a crater seven feet deep and fifteen feet across.

The Zeppelin then went on to bomb Wigan, killing a total of eight people.

Harry Antrobus, whose son still lives in Moore, was on duty that night on the Manchester Ship Canal at Randall’s sluices.  He told Geoff that he felt the hair prickle on the back of his neck as the Zeppelin flew over.  He was armed with just a broomstick. 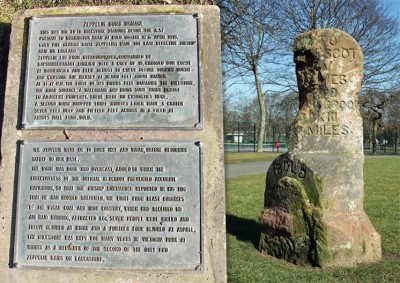 This was the fifth milestone standing beside the A.57 Prescot to Warrington Rd. At Bold on the 12 April 1918. When five German Naval Zeppelins made the last effective airship raid on England. Zeppelin L61 from Wittmundhaven, commanded by Captain Leutenant Ehrlich with a crew of 19, crossed our coast at Withernsea and flew almost to Crewe before turning north and crossing the Mersey at 18,000 feet above Malton. At 11.17 p.m. the first of its bombs fell damaging the milestone, the road surface, a water main and doing some minor damage to adjacent property. There were no casualties here. A second bomb dropped three minutes later made a crater seven feet deep and fifteen feet across in a field at Abbots Hall Farm, Bold. The Zeppelin went on to bomb Inoe and Wigan, before returning safely to base. The night was dark and overcast, added to which the effectiveness of the official black out prevented accurate navigation, so that the airship commander reported in his log that he had bombed Sheffield. The light from the blast furnaces of the Wigan Coal and Iron Company, which had received no air-raid warning, attracted L61. Seven people were killed and twelve injured at Wigan and a further four injured at Aspull. The milestone was kept for many years at Victoria Park at Widnes as a reminder of the second of the only two Zeppelin raids on Lancashire.