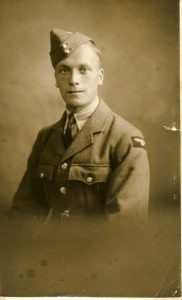 Harry Mather was born in 1920 at Stretton, the youngest child of Henry Mather, who had been born at Marbury near Northwich, and Ada Maria Mather (nee Hornsey) who had been born at Hammersmith, London.  Harry’s father was a joiner.  Harry had six older siblings: John William, Olive, Bertram Henry, Hilda, Charles Hornsey, and Ida.

The 1939 Register recorded Harry as living at home in Appleton, with his parents and three of his siblings.  The eldest three children had left home some years previously.  Harry was employed as a motor driver in road maintenance.

Harry served in the RAF in World War Two.  He saw service in Egypt, South Africa, and Italy.  One of his older brothers, Charles Henry Mather, also served in the war.

In 1945 Harry married Margaret A. Scott and they had one child.  Harry and his family continued to live in Appleton, but some members of the family were living on Hatton Lane in Hatton in 1945 and the family had links to Hatton, Stretton, and Appleton.  So, Harry was included in the presentation evening in June 1946 in Hatton.