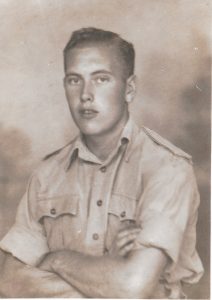 George Arthur Houghton was born in 1920 at Hatton, the son of Frank and Agnes Ann Houghton (nee Evans).  Frank was a horseman on a farm and had been born at Hatton.  Agnes Ann was born at Millom in Cumberland into a family who then moved to Hatton during the Great War.  Arthur also had an older sister called Barbara Eleanor.

The 1939 Register recorded him as living at Hickson’s Cottages in Hatton, with his widowed father, who was a brewer’s labourer for Greenall Whitley.  George Arthur was working as a butcher’s assistant.  Also living with them was William Herbert Green and his wife Barbara Eleanor (George Arthur’s sister) and their young son.

George Arthur enlisted in 1941 into the Royal Regiment of Artillery.  He was assigned the service number 1782387.  He took part in the Siege of Malta which lasted until November 1942 and which was an Allied success.  After the war he was posted to the Military Police in Padgate, Warrington.