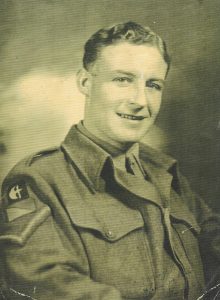 Vincent Harrison was born in 1919 at Hatton, the fourth son of John Harrison and Mary Elizabeth Harrison (nee Cliffe).  John Harrison was born at Over Kellett near Carnforth in Lancashire and the couple originally lived in Hatton.  John then obtained work as a stud groom in Southworth-with-Croft, near Culcheth, subsequently moving back to live in Hatton.  Mary Elizabeth was from Hatton.  John and Mary Elizabeth would eventually have ten children, five boys: John (Jack), James (Jim), Albert Frederick (Fred), Vincent and Alfred Raymond (Bill) and five girls: Mary Agnes Florence, Evelyn, Alice Gertrude, Violet and Elizabeth.

After leaving school Vincent followed his father into the world of working with horses, becoming a jockey.  In the mid-1930s, at the age of fifteen years, he became an apprentice jockey for British thoroughbred racehorse trainer the Honourable George Lambton at Newmarket in Suffolk.  Vincent had some success at this prior to the outbreak of World War Two.

When war broke out in 1939 Vincent was living at home in Hatton with his parents, his brother Fred, and his younger sister Elizabeth.  He was employed as a butcher’s assistant.

Vincent enlisted in the Cheshire Regiment and served all the years of the war.  Between 1941 and 1945 he served in his regiment alongside the Eighth Army which was a British field army, fighting in the Western Desert in North Africa and he also saw action in France, Italy, and the Middle East.

After the war, his physique had changed so instead of resuming work as a jockey on thoroughbred horses, he rode in National Hunt races, for several local trainers.  After he had given up being a jockey, he worked for the Pinfold Stud near Knutsford, where top class horses were kept.  He also transported racehorses to race meetings for George Parton who resided at The White House in Stretton.

In 1952 Vincent married Joan Irene Webster from Manchester and they had two children.  In 1974 they moved to Warburton near Lymm and lived there until Vincent passed away in 1982 at the age of 62 years.  Joan passed away in 2004.