Daresbury station served the Birkenhead, Lancashire and Cheshire Joint Railways. It opened on 18 December 1850 and was originally called Moore. But this caused confusion with our other station, so the name was changed to Daresbury by 1855.

The station was similar to all the others on the line – look at Frodsham and Helsby today. There was a single storey booking hall, office and waiting room at one end and a two storey station house at the other. It was only open to passengers, having no goods facilities other than for parcels.

When the line opened, four trains a day ran in each direction between Chester and Manchester. 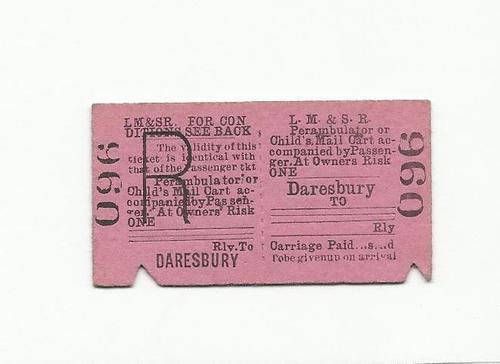 A lady who lived in the village in the 1920’s and 1930’s can remember the excitement of being given a penny and then being taken to the station to buy chocolate from the machine. Would it be wrapped in gold or silver paper?

In 1919 the Sunday school had plans to take the children to Frodsham on the train for their annual trip and the railway company had agreed to put extra carriages on the 1pm train. But there is no record of whether it went ahead or not.

The station was closed on 7 July 1952 and the buildings had to be demolished soon afterwards because they had been damaged by vandalism.

If you stand on the pavement on the railway bridge at the junction of Runcorn Road and Moss Lane, look west and you will be able to see the old platforms although the view is better in the winter months.