Kenneth was born in Manchester in 1911. He was a skilled painter and decorator.

During World War 2, he served in the desert, but caught a form of malaria transmitted by sand flies. For this, he earned the nickname ‘sandfly’ from his army colleagues. He never recovered properly, nor did he receive proper treatment and suffered from mental health problems for the rest of his life.

After the war he returned to Manchester, where he lived with his wife, two daughters and a son. He found life difficult and after his wife died, he couldn’t cope, spending some time in an asylum and leaving his children in the care of their grandparents. He packed a suitcase and moved from one decorating job to another, sleeping wherever he could.

A couple from Moore, John and Phyllis London, had a narrow boat and first encountered Kenneth along the towpath of the Bridgewater Canal in Manchester, where he had constructed a shelter for himself, made out of pallets.

Some years later, Phyllis was talking her dogs along the towpath in Moore, when she met Kenneth once again. This time he was living in a WW2 Anderson shelter on the canal bank. She stopped by to talk to him and later that day returned with food and a hot drink for him. From then on, John would stop each day on his way to work and take Kenneth a flask and sandwiches. At weekends, two narrow boats used to stop near Kenneth’s shelter and the people gave him a hot meal.

The Londons invited Kenneth to sleep in their motor home which they kept on their drive. They bathed him and gave him clean clothes. He used to enjoy watching the snooker on the television. 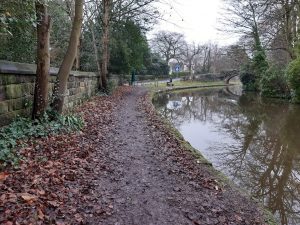 village. John gave him a fishing umbrella and some tackle and he lived under the umbrella for the rest of his life. Phyllis and John continued to take food to him and kept an eye on him. He collected his pension each week and sometimes walked into Stockton Heath to buy more fishing tackle. Many villagers used to enjoy chatting to him, but there were others who were troubled by his presence in the village.

Ken died in 1984. His wife had died standing up at the kitchen sink. Kenneth wanted to die like that and must have known that his time had come, as he spent the night prior to his death standing against the wall behind his umbrella.  A memorial was laid on the canal bank but it has sadly either become lost in the undergrowth or removed.

John set up a fishing competition in his memory, the children of the village being

invited to compete for the ‘Kenneth Thomas Fishing Trophy’. Warrington Anglers’ Association waived all their fees. His funeral was held in Manchester and a rough stone laid on the canal bank, though sadly it is now so overgrown that it cannot be seen.

In November 2020, a Memorial Plaque was installed on the wall by his ‘spot’ on the canal bank.