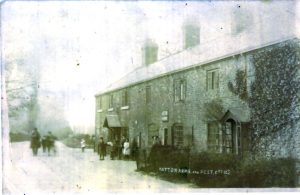 The village public house in Hatton dates from before 1841 and for many years was known as the Red Lion.  Charles Taylor was the long-serving publican of that time.  He was also a blacksmith.  By the 1880s it was known as the Hatton Arms.  It was a Greenall Whitley pub later run by licensee John Kirkham until his death in 1909 and subsequently his widow Lavinia ran it until the 1940s.  There have been several licensees since then, it now being run by a consortium of locals.  The building is Grade Two listed and it used to comprise the public house, a village shop and the village post office, run at one time by Alfred and Mary Povey.

The car park of the pub was once a croft ( a small agricultural landholding) of about half an acre, tended by a local tenant.  The croft belonged to the Walton Estate of Lord Daresbury until it was sold in 1941 following his death.  Later it became the car park.