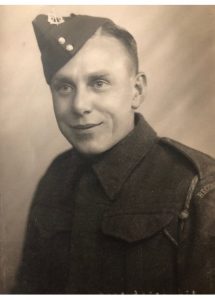 Sidney James Hawkins was born in 1916 at Hatton, the youngest son of Sydney George Hawkins and Mary Ellen Hawkins (nee Green).  His father and mother were from Eccleshall in Staffordshire and had moved to Acton Grange in the 1900s and then to Hatton (Factory Yard) at the time of the First World War.  Sidney had four older brothers: Philip William, Alfred, Cyril John and Roland and a younger sister Irene (Dolly).  Their father worked as a horse driver.

In 1939 Sidney was employed as a butcher and was living at home in Hatton, with his parents and some of his siblings.

In late 1942 Sidney had married Dorothy M. Rippin in Leicestershire and they would eventually have six children, three boys and three girls. They moved back to Warrington after the war ended.