On Sunday 17 November 1968, a group of Rugby Union players calling themselves ‘The Gentlemen of Moore’, played a match against Warrington Veterans.  The vets won by eleven points to six, but a new team was born.

Afterwards, in the bar of the Red Lion, it was suggested that the Gentlemen of Moore should form themselves into an official club.  The inaugural meeting was held just three days later. A committee was elected and kit, subscriptions, training and fixtures all discussed.  A social committee was formed and the rules of the club were drawn up.  It was to be open to all residents in the neighbourhood of Moore and Daresbury.

The first set of shirts were white with red collars and cost £3.  Players could buy them or rent them for 25p per match.  Today, the shirts are black and gold with black shorts.  The team drew their first game against Lymm, 11 – 11 and lost their second against Old Birks, 10 – 15.  However, it was reported to be a good game against strong opposition and enjoyed by all who played.

There was, of course, no home ground at this time, but after a lot of hard work, the pitch at Moss Lane was obtained on a lease from the farmer and the first game played on it in September 1971, when the home team beat Warrington.  In 1982, the second pitch was rented and subsequently bought in 2001, with floodlights being installed four years later.  More recently, the first pitch has been reseeded, new posts put up and new dugouts installed.

In January 1970, the club decided to go ahead and invest in a clubhouse that was licensed to sell alcohol.  A former motorway site hut was purchased and fitted out to provide both changing and social facilities.  It was opened just before Christmas 1971.  Funding from the RFU, National Lottery and the club itself, enabled the original clubhouse to be extended in 1993, with the provision of new changing facilities, washrooms and toilets.  A few years later, the remaining wooden structure was demolished and the new clubhouse built.

Social events have always played a big part in club life, whether it is just to meet after the match over a drink in the bar, or to attend the large scale events that are enjoyed and well supported by the local community – the pantomime, gin and beer festivals and comedy nights.

The club has been able to run as many as five teams, but now there is the regular first team and an occasional second team, with the hope that there will be regular second team fixtures.  Tours have been enjoyed both in the UK and abroad.  The club has, at times, run both mini Rugby and junior sides and now has a ladies squad with a very keen membership.  The first team is currently enjoying a successful season.  They play in the HALBRO North West League (Sale Sharks Division 3, south) and in March 2019 were third in that league. 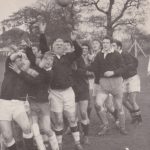 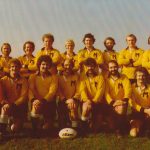 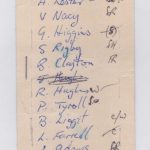 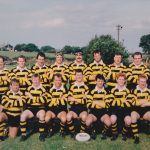 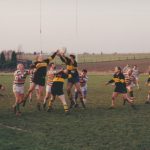 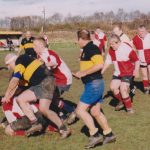 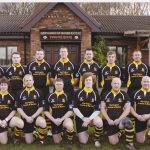 My thanks to the club and in particular Robin Cheek, for providing me with this information and photographs