The Light Railways Act of 1896 authorised  light railways and rural tramways to be built without the passing of a specific Act of Parliament  for each  line but subject to less strict conditions than those  for major railway lines. It  led to the building of many light railways  throughout t he U.K. such as the Welshpool to Llanfair railway  and  the Welsh Highland from Dinas (now  from Caenarfon) via Beddgelert to Porthmadog , the object of an outing not to be missed.  The Act was to expire after a few years but this  was overlooked so that the Act  later was used to restore lines such as the Bluebell Line which had been closed under the Thatcher-Beeching  schemes. Similar lines were built all over Belgium, Germany and other countries where they were usually in metre gauge which is still used by many municipal tramways in Europe.

One proposal under the Act  was made in May 1901 for a light railway from the Swing Bridge at the mouth of Ellesmere Road in Stockton Heath to Runcorn station via Walton and Moore.  It is hard to see how it could have  been  an economic success. Moore was a small village. There was no Sandymoor estate or Runcorn New Town with populations to sustain it.  There was a very useful, ten minute connection to Bank Quay station from Daresbury station, which was in the middle of Moore on the Chester Line. That station closed in 1956.Thebuidling of the light rail line may have led to development both residential and domestic property  along its route.  The electric  tramway of Warrington Corporation from Sankey to Wilderspool , later extended over the swing bridge to Victoria Square in Stockton Heath , built under the terms of the Tramways Act 1870, was opened  in 1902.

Details of the proposed light railway are difficult to find. A volume of drawings can be examined in Chester Record Office (M8973), They were made by engineers Knowles and Russell of Liverpool , Bennett and Ward Thomas of Manchester and Hill and Co Solicitors of Manchester. The line was to be eight miles 6 chains long, a single line with passing loops   and a speed limited by the 1896 Act to twenty five miles per hour. The proposed gauge is not shown on the plans. A proposed but never built light railway to Northwich from Victoria Square  did have points built for it and a length of a few feet  from the end of the standard  gauge  line from Warrington at its terminus in Victoria Square .

The drawings do not reveal what the motive power was to be. No poles for overhead electric wires are shown on the plans.. Perhaps   it was to be steam. The LNER later used Sentinel steam railcars for their lesser used branch lines. The writer remembers those of the Cheshire Lines Committee in use from Warrington Central to Stockport. The sight of one puffing its way from Cadishead station at three o’clock was welcome to the writer playing football in a local park used by his junior school. It meant that a cold, wet ordeal would soon end with a walk to the warmth of home.

A report in the Runcorn Examiner for 20/06/1901 reveals that Stockton Heath Parish Council vehemently opposed the line to Runcorn. They refused to contemplate a railway in one of their main roads. They would have accepted a light railway but he term ‘railway’ alone was used in the proposal. An engineer for the proposed ‘railway’  replied in evidence to an enquiry that any frontager along the route who ordered house coal could have  it delivered by wagon to his front door.  For local historians the plans show the names of the owners and tenants of the properties  along  the proposed route.

The line was never built. In 1919  Crosville Motor services began to run petrol, later diesel  busus from Warrington to Runcorn via Moore . Halton Transport took over  from Crosville in the 1980s until it had to go into liquidation in January 2020. The route  was then taken over by Warrington Transport. Its fares are necessarily expensive. Many people in Moore prefer the privacy, convenience and comfort of their own cars. Some do not even know where the bus stops are or at what time the buses run. They will learn to do so if their doctors advise the DVLA that they should no longer drive.

Had the tramway been built, the locomotive may have been like this one in Welshpool. 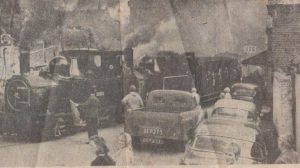