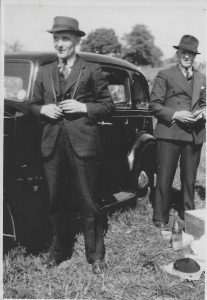 John Harrison (known as Jack) was born in 1907 at Hatton, the eldest son of John Harrison and Mary Elizabeth Harrison (nee Cliffe).  John Harrison was born at Over Kellett near Carnforth in Lancashire and Mary Elizabeth was from Hatton.  Jack already had three older sisters, Mary Agnes Florence, Evelyn and Alice Gertrude.  The family would later grow to ten siblings with the birth of Jack, James, Violet, Albert Frederick, Vincent, Alfred Raymond and Elizabeth.

By 1910 the Harrison family had moved to Southworth-with-Croft near Culcheth, where the father worked as a stud groom.  They later moved back to Hatton, where John senior continued to work with horses.

It is not known what Jack worked as after he left school, but by 1939 he was employed as a butcher manager in Warrington and was living on London Road in Stockton Heath.  In June 1935 Jack had married Winifred Edna Looker from Warrington and they would eventually have two children.

Jack enlisted in the Royal Air Force in World War Two.  Enlistment took place at RAF Padgate.  Nothing is known of the details of his war service.  The site of RAF Padgate was demolished in the 1990s.

After the war Jack worked for Singleton’s Butchers at 9, Bridge Street in Warrington and later owned his own butcher’s shop in Stockton Heath, where his brother Fred (Albert Frederick) worked for him.  Jack was a member of the Freemasons.