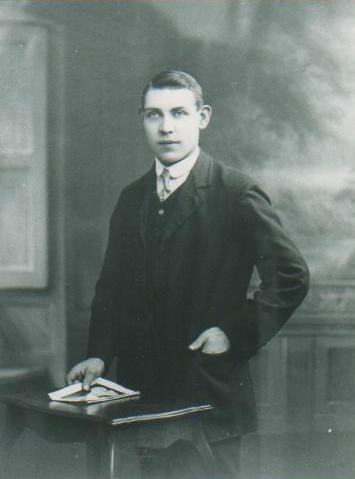 Percy was born in April 1896 at Hatton and was one of eleven children to William (1854-1937) and Martha Duncalf nee Jones.  William had been born in Kingsley and was working as a farmer’s teamster.  Martha was born in Wimbolds Trafford.  Percy’s elder siblings were Annie and Mary, born in Wimbolds Trafford.  William and Bertha were born in Daresbury and Jennet was born in Acton Grange.  Sadly, another three children had died in infancy.   Percy went to Daresbury School and by 1911, aged 14, was working as a farm labourer in Hatton.  By 1914, the family had moved to Ivy Mount, Barker’s Hollow.

Percy first served as a gunner with the Royal Field Artillery (regimental number 57305) and also served with the Military Foot Police.  He was sent to France on 13 July 1915 and wounded three times.  He re-enlisted in 1919 as a private with the Gloucester regiment (number 39925).

He was awarded the 1915 star, the Victory medal and the British War medal.

After the war, in 1919, Percy married Lillie Carpenter in Colney Heath, St Albans.  They soon moved to the Daresbury area, where their only child, (Sylvia) Audrey was born in 1921.

Percy died in 1933 and his widow and child returned to St Albans.