Horace was born on 16 July 1896 and baptised at Daresbury on 9 August 1896. His parents were Ralph, a railway labourer, and Annie (nee Burrows), who were married in 1874.  They lived in a cottage on Runcorn Road, Keckwick.  This was probably one of the cottages called Milner’s cottages and now considered a part of Moore and called Firs View.

In 1911, Horace was apprenticed to a wheelwright, probably Isaac Lawton.

We know that Horace served in WW1, because his name appears on the Roll of Honour in Daresbury Church, but no details have been found of his military service.

The 1939 register records him as living at The Hawthorns, Moore with his wife, Florence. His occupation is given as master plumber. This toilet cistern was found on an old farm in Sutton Weaver and clearly shows Horace’s skills. 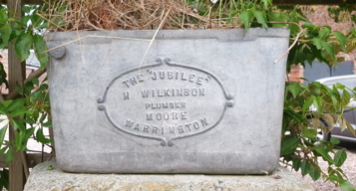 Horace died in the Royal Infirmary in Liverpool on 1 May 1949.  Probate was granted to his widow, Florence, and brother, Frank, a building contracts manager.  The value of his estate was recorded as £9263 6s 3d.