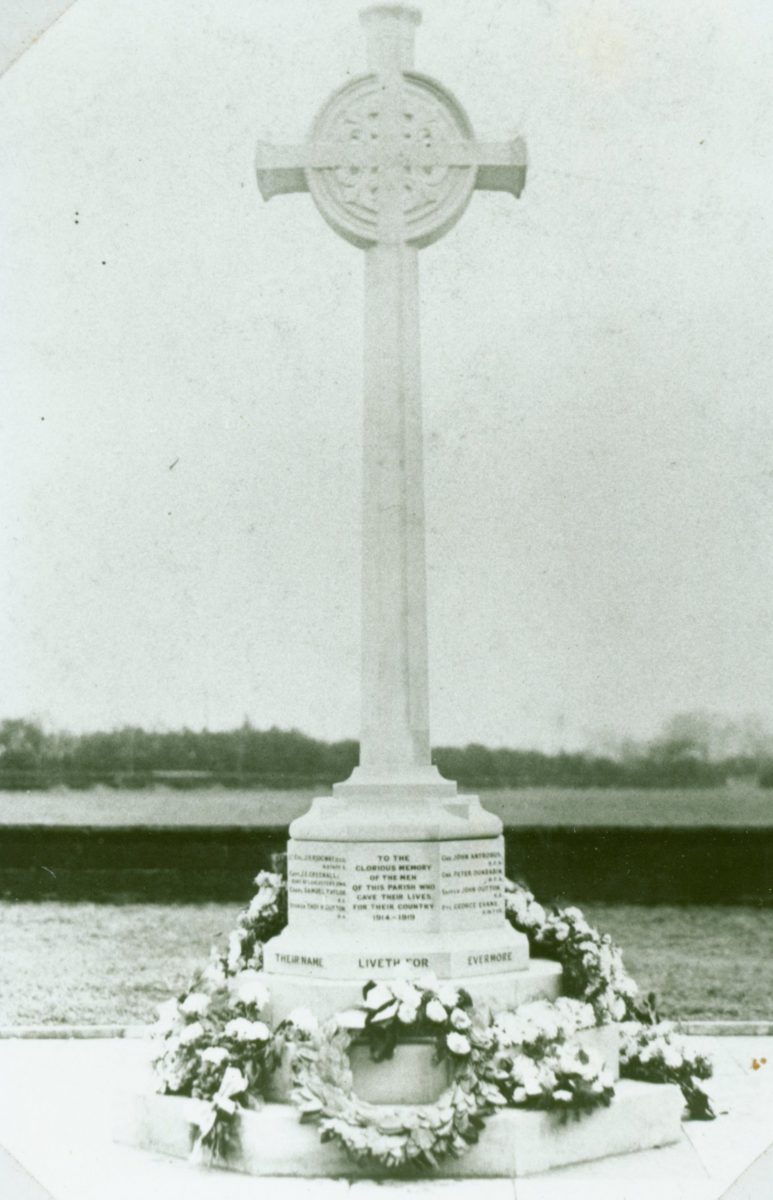 The memorial that stands in the churchyard of All Saints’, Daresbury, commemorates the men from the parish who lost their lives whilst in the service of our country during the two world wars. We know that there were others who lost their lives, whose names do not appear here. Some are commemorated on memorials elsewhere.

Our WW1 project aims to identify all those who lost their lives in WW1 and also to identify all the other men and women of the parish who served their country. We want to tell all their stories and those of the families and villages they left behind.

Apart from our research into the soldiers and their families, we are also investigating the repair of the war memorial. Some of the lead lettering is missing – washed out by the action of rain on the stone. It needs cleaning and the paving and kerbstones need relaying. The work needs to be undertaken by specialists. We are working jointly with the church to secure funding and seek approval to do the work.

The memorial cross was funded by public subscription and designed by Messrs. Mowbray & Co, London. It is sixteen feet high and made of Portland stone with lead lettering set into marble. It was dedicated at a special service held on 31 October 1920. The two local newspapers of the time reported the service.

“The cross was draped with the Union Jack and at the base was a large laurel wreath, surmounted by beautiful specimens of white chrysanthemums.

The Sunday School scholars assembled at Daresbury schools and ex-service officers and men took up a position opposite the Vicarage, and the procession, headed by Preston Brook Band, marched into the church……. Whilst the procession was being formed, special peals were rung by the bellringers, and the organist (Mr Fairclough) played appropriate selections of music.

Before unveiling the cross, Brigadier General Sir C. Maynard said that they were dedicating the cross to their (the servicemen’s) memory, as a mark of their appreciation and gratitude. The service which had been held in the church was not likely to be readily forgotten by those who had attended it, but what was wanted something that would stand as evidence to future generations to show the love, pride and honour in which they regarded the valiant men of the parish.”

“The pulpit, lectern and altar were covered with lilies and chrysanthemums. The church was crowded and the service very impressive.

The names of the fallen were read as the congregation remained standing in silence and special prayers were offered for those who gave their lives and for their relatives.

Rev C.C. Lindsey said “When the great call came they who were unaccustomed to fighting went from the counter, plough and office determined to fight and die for their king and country. They were united and all stood shoulder to shoulder in the fight. Many of them were mere boys, but when they had been out a short time they became men.

The cross in the churchyard would be a lasting memorial to the boys from that parish who had given so much.”

Men commemorated on the memorial cross –

Other men from the parish who lost their lives during WW1, but are not commemorated on the war memorial