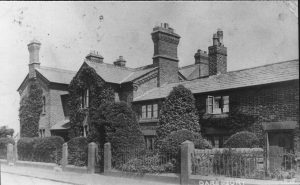 In June 1941 fifteen girls of the Women’s Land Army moved into the old vicarage at Daresbury House.

It had been acquired some months earlier, with the idea of turning it into a hostel which would accommodate up to thirty Land Girls, who would go out each day to work on local farms. At the time, nearly 400 women had enlisted in the Women’s Land Army in Cheshire, and not all of them could board on the farms where they were to be employed, hence the need for a hostel. Daresbury was to be the first in the county.

The Daresbury land girls each paid 16/- (shillings) per week for board and lodging, and had the use of reading rooms and a library, and a warden was employed to take charge.

They had come from towns all over Cheshire, from Chester, Crewe, Stockport, and the Wirral, as well as Warrington, and had worked as typists, shop assistants, bank clerks and hair dressers before enlisting. They had been given no training, but were to learn about farming as they worked on the farms, and their day began at 6 o’clock in the morning, when they set off for work on the bicycles provided for them.

The land girls were soon involved in village life, organising a dance as part of the parish events in aid of ‘Warship Week’ in March 1942. They also performed the one act play ‘Eldorado’ in the Variety and Entertainment show held in Moore in October of the following year in aid of the District Nursing Association. No doubt they joined in many other local activities and events as well.