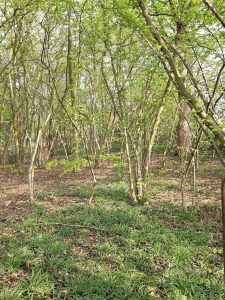 Windy Willows Wood by the Daresbury Expressway on Calmington Lane, was recorded on the Tithe Map of c1840 as ‘a plantation in Hoohow or Hoo Row’. It extended to six acres and was owned by Sir Richard Brooke.  He lived in the Georgian mansion at Norton Priory, which had an extensive estate. Today it is managed by the Woodland Trust and its area has been reduced to 3.34 acres.

The planting is alder, birch, sycamore and oak, with several ‘veteran’ trees.  A veteran tree is one of any age, but which displays the characteristics of an ancient tree – a low, squat shape, a wide trunk compared to others of the same species and a hollowing of the trunk.

There is also hazel and hawthorn and the woodland floor is full of ramsons (wild garlic) and bluebells in the spring.  It is well worth a visit and easily accessible.

Keckwick Brook flows along the eastern edge of the wood.  This watercourse used to mark the boundary between the estates of Norton and Keckwick.  Before any of the canals were built, the brook followed a northerly course into the River Mersey.  The river is tidal and so was the brook.  Runcorn Road (now Calmington Lane) was the first crossing point above the marsh and a ford was established here in medieval times.  There used to be a small bridge crossing the stream that would have been used by pedestrians.  Carts and coaches crossed via the ford.  The road itself was the the main route from Halton village to Warrington.

Stone blocks can still be seen on either bank of the brook, in the northern part of the wood.  There was once a sluice here.  Some of the old stones from the footbridge lie in the undergrowth and can be seen in the winter months.  The brook was diverted and canalised at various times and the remains of the old channels are still evident.

The wood was also called Brook Plantation, but it was changed to ‘Windy Willows Wood’ by the pupils of Moore County Primary School when they ‘adopted’ it in the 1970’s.