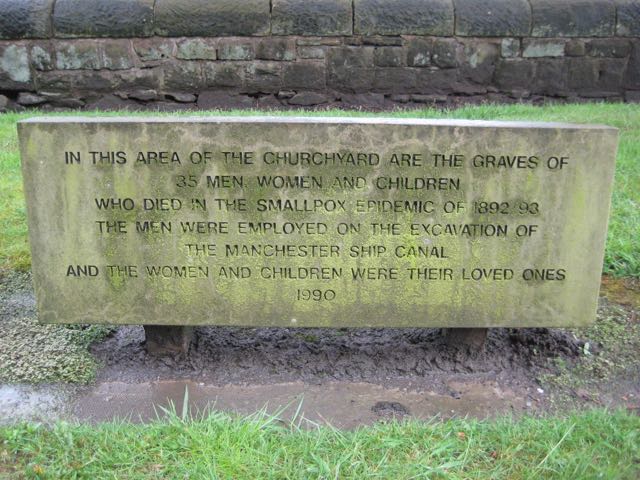 In 1892/3 there was a smallpox epidemic amongst the ship canal workers. It was thought that the disease was introduced by a navvy from Leeds. Records give conflicting accounts of the numbers who were affected and the number of deaths, but there were at least 35 men, women and children who died. Many, if not all, were buried in Walton churchyard in unmarked graves. In 1990, local residents erected a memorial stone to commemorate their lives.

Runcorn Urban District Council built the isolation hospital on the south bank of the ship canal, just to the west of Moss Lane, Moore. It was a wooden structure, sited on a spoil heap, with its own water supply and a road to it off Moss Lane. In February 1893, it had 12 male and 8 female patients. It is mentioned in the 1901 and 1911 censuses – no occupants in 1901 and just the caretaker and his sister in 1911.

There is some anecdotal evidence that it was later used as an isolation ward for children with scarlet fever, though I am inclined to think that this was not the case, as there is evidence that such children were sent to Dutton Isolation Hospital.

Some of the older residents in Moore tell a tale of how they used to play on the site of the hospital and especially enjoyed playing in the old disinfectant trough at the entrance to the site.  One gentleman remembers playing there with his friends and creating a ‘den’, complete with a fire and a chimney.  He also remembers being severely told off by his mother for doing so!