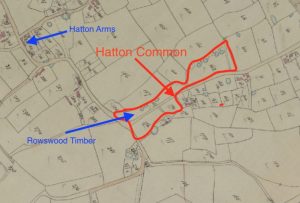 Before the 1861 Census of England and Wales there is no mention of Hatton Common in the village record.  However the tithe map of 1844 for Hatton shows that a plot called The Common was owned and occupied by a Robert Okell and was used as pasture.  The plot stretched from the bend on Hatton Lane where a timber suppliers is now situated, along Hatton Lane towards Stretton, as far as the current South View.  Residences do feature in the 19th century on The Common, occupied over the decades after 1861 by families such as the Heesoms, Bramwells and Clares, to name but a few. These residences are long gone.