John James Whitley was born at Newton-in-Makerfield (Newton-le-Willows) in 1868.  His father, Thomas, was a clerk in holy orders and his mother was the daughter of a Mansfield tobacco merchant.  John James (J J)  was educated at The College School in Hereford.  The Whitley family moved to Daresbury parish when the father became the vicar and they lived at the Vicarage on Chester Road in Daresbury. 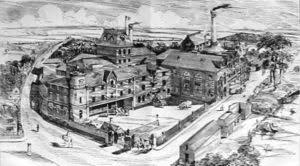 J J started as a clerk in the family brewery, Greenall Whitley & Co. Ltd, and by 1898 was a director and manager by 1905.  When the father moved to another parish, they went to live in Acton Bridge.

J J’s grandfather John Whitley had married Isabella Greenall and this is where the two surnames came together in the name of the brewery.

In 1901 J J married Eleanor Littler Buckingham and they had two children, Isabella Mary and Thomas. Sadly Eleanor died in early 1905 only a few months after her son was born.  JJ re-married the following year and he and his wife Dorothy Eliza (nee Daubeney) took up residence at Hatton Cottage (Hatton Villa) on Warrington Road in Hatton.  He had two more children with Dorothy, a daughter named Elizabeth and a son called John Daubeney, who would eventually become a managing director and company chairman of Greenall Whitley.

Sadly Dorothy passed away in 1931 and J J in 1942, whilst still living at Hatton Cottage.