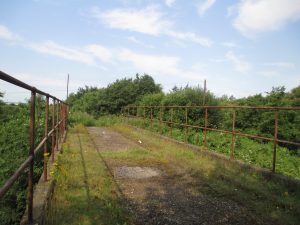 As the canal was in the process of being built, there were at its height over 200 miles of temporary track, more than 6000 wagons and 180 locomotives. This was for a canal of 36 miles in length.

Sadly, the main contractor, Thomas Walker, died before the canal was finished and eventually the Ship Canal Company took over the final stages of the build. Now having all the railway stock, on completion of the canal, this formed the basis of the Ship Canal Railway, the largest private railway in the country

Construction materials were brought in to the canal excavation via a connection to the Cheshire Lines Railway east of Irlam railway station. This amounted to 10,000 tons of coal and 8,000 tons of cement every month. All railway lines that were to continue to cross the new canal needed to be raised to over 75 feet above the canal to allow for enough clearance for the passage of boats. It is worth mentioning that there were a number of separate segments to the railway.

A large amount of the lines laid during construction were on the bed of the canal and so moved to other work places or removed. The railway that ran along the north side of the canal appears to have been kept and formed the basis of the later canal railway. There is a wonderful book by Don Thorpe, the ‘Railways of the Manchester Ship Canal’, that covers the canal railway with good explanations and helpful maps.

Our local section of ship canal railway ran from behind what was Naylor’s woodyard, under the Chester Road swing bridge and along the north side of the canal as far as the Old Quay swing bridge in Runcorn. A steep branch from Walton ran down the end of the Laporte site and swung under the deviation mainline railway bridge to Acton Grange, where Richard Evans had a woodyard importing pit props for his coal mines. Naylors, Laportes, Evans, a sand extraction company and Wigg works were all users of this line at one time.

What about visible remains of the railway? Although not quite in Moore village, there is a cast concrete bridge over Moore Lane just over the swing bridge; this replaced an earlier wooden bridge in1923. Along the road by the warehouses heading towards Warrington there is a short section of track visible in the road surface, also a similar section is visible well down the road towards Randal’s sluices.