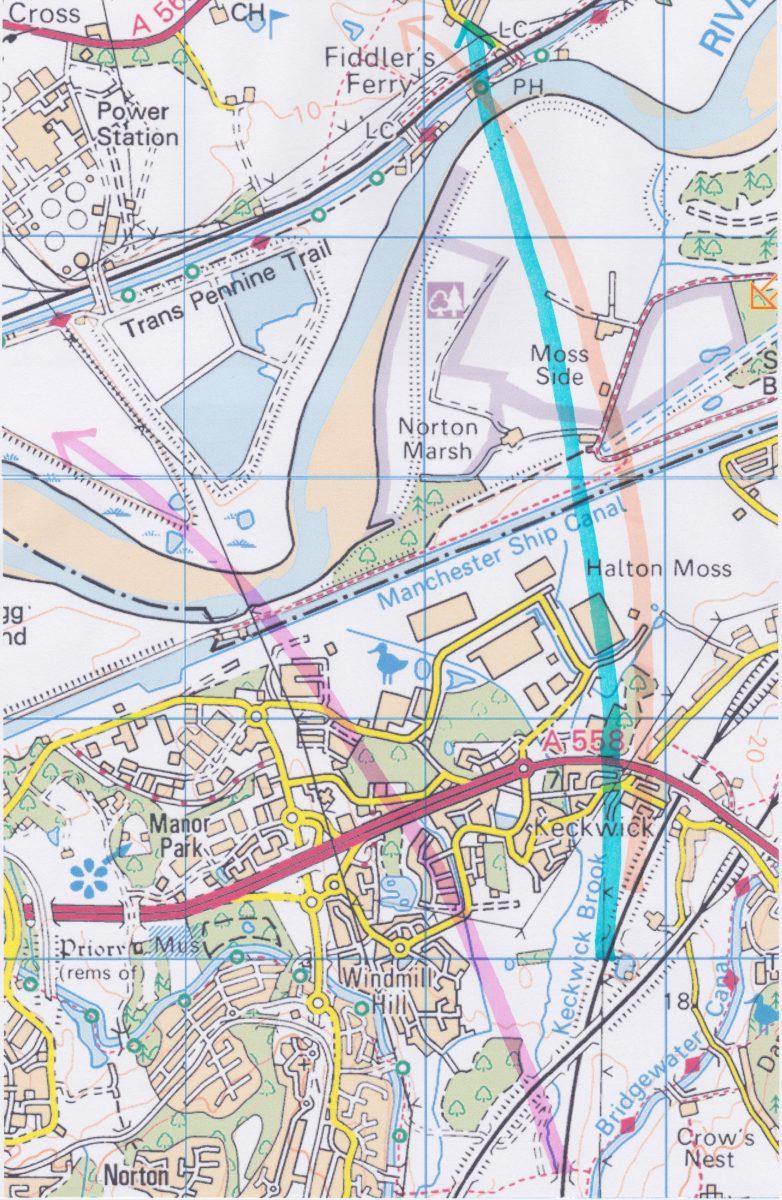 Today the London and North Western Railway crosses the Mersey at Runcorn. Ethelfleda’s bridge (also known as Britannia’s bridge) was opened in 1868.

But there were plans to take the railway across the river nearly forty years earlier. These plans are available to view at Chester Archives, but we have so far been unable to discover why they were abandoned.

In 1830, the Liverpool and Birmingham Railway Company, had plans drawn up to take the line (shown as pink on the map) from a point by the Bridgewater Canal opposite Crow’s Nest Farm, past Manor Farm near Norton Chains, across the river onto Cuerdley Marsh, through the Widnes area and on into Liverpool.

In 1834, there was a proposed alteration to the line of the Grand Junction Railway (shown as green on the map). George Stephenson and Joseph Locke drew up plans to take the railway across the river to Collins Green (St Helens) where it would join the Liverpool and Manchester Railway, rather than pass through Warrington. It would run from a point near Poplar Farm, continue near to Hangman’s Corner, pass to the west of Bob’s Bridge and Mosside farms and cross the river to the west of the Ferry Inn. Consent was received from the Cheshire landowners affected by the proposals and a tender of £29,000 submitted for the building of the bridge, by David Macintosh, who built the viaduct at Dutton.

In 1837/1838, the Grand Junction Railway had further plans drawn up by Joseph Locke, this time to join the Liverpool and Manchester Railway at Huyton. The line (shown as orange on the map) would follow a similar route to the one above, but swing west towards Huyton just after crossing the river via a seven arch bridge with spans of 75’. The railway company sought parliamentary approval, but it was refused.

The Grand Junction Railway finally opened on 4 July 1837, with trains running along the 82 mile route from Birmingham to Warrington and joining the Liverpool to Manchester Railway at Newton (now Earlestown). Quite why the plans for the Keckwick to Huyton railway were drawn up when clearly the opening of the line from Birmingham to Warrington was imminent, is a mystery.

More detailed information about the river crossings is available in the following books which can be loaned from Halton Lea Library.