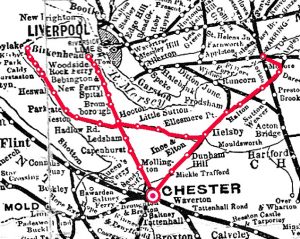 One of the main routes opened was from Chester to Walton Junction just south of Warrington in 1850 to link the Chester and Birkenhead Railway to the London and North Western Railway at Walton.

The station on this line that was in the parish was Daresbury which opened when the railway did. There is a section on this station elsewhere on our website.

A good section of the Birkenhead Railway is now part of the Merseyrail Wirral line electrified from Birkenhead to Chester. Although the unnelectrified Chester to Warrington line is still regularly used by passenger trains, the number if freight trains has dropped  in recent years, the only regular recent freight trains are log trains to Chirk, sand workings to Ellesmere Port and a coal train to Penyffordd.