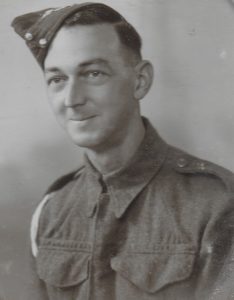 Frank Merrill was born in 1913 at Stockton Heath, the eldest child of Frank and Jessie Shaw Merrell (nee Bell).  The father was a labourer in an iron foundry in Warrington, born at Rostherne near Altrincham and the mother was born at Latchford.  Frank junior was the eldest of a large family.

In early 1936 Frank married Elsie Margaret Robinson who was from the Runcorn area.  They had a daughter and a son in the years prior to WW2 and another daughter during the war.

The 1939 Register recorded the couple as living on Hatton Lane in Hatton.  Frank was employed as a labourer in the service department of a soap and chemical manufacturer.

Frank served in the Royal Artillery during WW2 and was involved in the Battle of Monte Cassino in Italy in 1944 and was still serving when the war ended in Europe in May 1945.

Frank Merrell died in 1966 in Warrington General Hospital at the age of 53 years.  His parents outlived him by a few years and his wife Elsie passed away in 1997 aged 81 years.