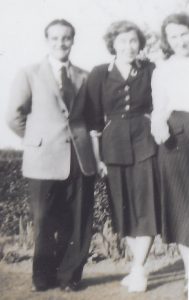 Alfred Raymond Harrison (known as Bill) was born in 1927 at Hatton, the fifth son and youngest child of John Harrison and Mary Elizabeth Harrison (nee Cliffe).  John Harrison was born at Over Kellett near Carnforth in Lancashire and Mary Elizabeth was from Hatton.  After their marriage they lived in Hatton for a while, but then by 1911 they were living in Southworth-with- Croft near Culcheth, where John worked as a stud groom.  Later they would move back to Hatton.  Bill had four older brothers called John (Jack), James (Jim), Albert Frederick (Fred) and Vincent.  His sisters were Mary Agnes Florence, Evelyn, Alice Gertrude, Violet and Elizabeth.

Bill was at school until a few years into World War Two, whilst his older brothers served abroad and on the Home Front.  He continued to live at home with his parents and his sister Elizabeth.  It is not known what occupation he had after leaving school, but in 1945, at the age of eighteen years, he joined up and was sent to Japan as a Driver in B Platoon 8th Company Royal Army Service Corps (Transport).  He was given the service number T/14488923.  By this time, he was part of an occupation force, Japan having surrendered in August 1945.

After the war it is thought that Bill worked for a time at Frank Hughes and Co. at Bishop’s Wharf on the banks of the River Mersey at Warrington, where his brother James worked as a warehouseman.  Bill also worked at other transport firms in that role.  He helped to transport horses for George Parton of the White House in Stretton, as did his brother Vincent.

In 1956 Bill married Dorothy May McHale and they had five children.

Alfred Raymond Harrison passed away in 2001 at the age of 74 years, predeceasing Dorothy by five years.