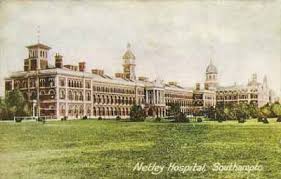 A fortnight later, on 7.9.16, John was sent back to the UK aboard HS Carisbrook Castle. The records say that he had dementia as a result of sunstroke/heatstroke and had complained of a headache and suffered a loss of consciousness. It is not clear whether this was related to the earlier bout of malaria. He was admitted to the Royal Victoria Hospital in Netley. Upon discharge, he was described as being reliable, a hard worker, intelligent and of a temperate nature.